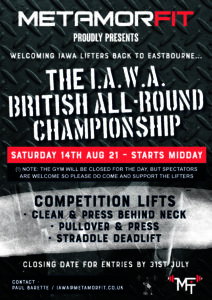 It will still be the “Andy Goddard Memorial”.  Andy was a great friend and supporter of the IAWA and as long as Al is involved promoting the World Postal Championships it will be done in Andy’s memory.

As it has been the past few years, the lifts for this World Postal will be the first day lifts of the upcoming World Championship.

Read the the info sheet as it outlines the “rules of the competition”.  Send your results to Al Myers at amyers@usawa.com. Also, please send in the official entry form with your club results. If you have more club entries than on the entry form just include extra entry forms 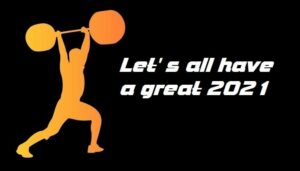 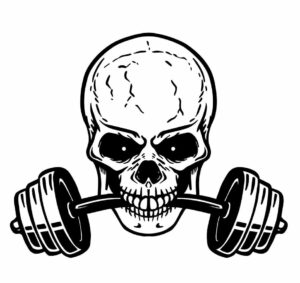 A Virtual Lift off / Competition –
Results to be posted 1st Weekend in May: (Sat 8th or Sun 9th)
Since we lost the Grip Competition this time, we now offer an opportunity to take part in the virtual lift off on the very same lifts…you can perform just one of the three lifts, two of them, or all three….. it’s up to you: The Lifts: (All performed on a 2 inch thick bar) Lift 1 Clean and Push Press – Lift 2 Fulton Deadlift – Lift 3 Vertical Bars Lift on 2 x 2inch Rods
Same as for previous events of this type: Wear the correct platform dress for the lift off. Perform it in front of the camera using the Camera as the Centre Ref. Give yourself the down signal or pause correctly in the finished position before replacing the bar. State your name, Age and Bodyweight when you post the lift or lifts. See rules printed below, any questions please don’t hesitate to ask me. Although this is a ‘for fun’ event, please understand that if anything posted is not legal per IAWA rules then we will not be able to consider it for the overall results. We must be seen to maintain the correct standards of performance whilst having fun too!
(For anyone who has not got access to a 2 inch bar but wants to take part, we will also have a section where a lifter can perform any or all of the 3 lifts on regular 1 inch thick bars)
Click here for the rules in word format
Click here for the rules in Pdf format

From I.A.W.A.(UK) President Steve Gardner
There is light at the end of the tunnel ………………. (an indication that a long period of difficulty is nearing an end).
I love that saying, a long way to go yet of course but it seems we are getting there…

Well now that we have let the dust settle after the roadmap announcements of bringing the Covid restrictions to an end (if everything goes to plan and there are no further hitches) after the end of June we should be ok to resume what’s left of our competition programme, salvaging the remainder of the competition year.

Saturday 3rd July will be the Olympics Competition at Burton and also the Powerlifting Competition on the same day, so lifters can enter either competition (one will be in morning and the other will follow. (Remember lifters don’t have to do all of the 3 disciplines, they can just perform one or two of the three if they wish). More details will follow later.

Saturday 14th August will be the British All Round Championships at Eastbourne, then Saturday 25th and Sunday 26th September will be in Wales for: The Welsh Open Championships on the Saturday and The British Disability Championships on the Sunday.
The details for the World Championships in the USA in October, and the Gold Cup in Ireland in November remain the same.
Chris Bass will re organise the Postal League with first leg likely to be in July (again details to follow)
The World Postal will probably remain the same, with results in by the end of August, and the Old Time Strongman Postal event will have the date re set at some future point, so again details will follow!
In short, fingers crossed and get ready for July. It looks like gyms should be open again from 12th April, so hopefully that is good news for all gym owners, and for those members who attend the gyms to access weights (Nothing certain yet but there is a possibility of running a virtual event in May whilst following all Covid restriction guide lines) …watch this space!

The IAWA Welsh Open Champs will now be held on Saturday 25th September 2021.

The IAWA Disability Championships will now be on Sunday 26th September 2021.

All other details remain the same.

31st January 2021 iawa@metamorfit.co.uk
A Covid Update regarding Fixtures:
This will come as no surprise to you all that we will have to announce the Grip Competition for February as unavoidably Cancelled. (we are concerned March’s ‘Midlands Open’ may go the same way but will update again in a few weeks on that one)……
However, Mark Haydock is also promoting the IAWA(UK) Strongman Competition at his place near Preston in May, and has decided the Grip Competition (Same lifts) can still go ahead on that day with the Strongman event to follow. So, the order of the day is: The Grip Comp 3 Lifts in the Morning, then a Strongman Competition of 3 Events (to be named) following the completion of the Grip.
Lifters will be able to lift in either the Grip or the Strongman ….OR…… they can enter Both if they wish and be ranked in the ‘Super Total’ …therefore being able to rank in the Grip and the Strongman and the Super Total…it is a very exciting concept, something special to look forward to ….more details later!

The changes to the fixture list can be viewed here

Clicking on any red highlighted lift will take you to the IAWA(UK) YouTube Channel where you can view a video of the lift being performed.

The IAWA(UK) AGM was held yesterday, for the first time via Zoom.

Please use the links below to view the meeting minutes in either Word or PDF formats.

12th October 2020 iawa@metamorfit.co.uk
From Paul Barette – Membership Secretary
It has been disappointing this year that Coronavirus has scuppered our great selection of events that were planned for 2020.
Many of our Members joined in the anticpation of competing in events up and down the country, abroad or participating in the postal competitions.
Steve Gardner is currently working on compiling our 2021 fixtures list and I am sure all of you (and I) are eager to get back to the lifting platform.
With this in mind the IAWA(UK) Executive Committee have unanimously agreed that we will extend all paid up IAWA(UK) Memberships by 12 months.
I can confirm that I have just completed this task, crediting all members with an additional 12 months. Your automated renewal emails will now reflect this and will now not be sent until 1 month before the revised renewal date.
If you have any questions regarding memberships please don’t hesitate to contact me.
Wishing you all the best in health – Paul
« 1 2 3 4 5 … 13 »