We are pleased to announce that applications for Membership and Membership Renewals can now be handled online, powered by MemberMojo.

There is a new Membership page which has been added to the website and can be found here.

Payment options are PayPal (account or card payment), Bank Transfer and Cheques can still be accepted.

For anybody that does not wish to use the new online system a manual form can be found on the downloads page.

The 2020 IAWA (UK) Fixtures, International Fixtures, Southern Fixtures and All-Round Postal League Lifts have been uploaded to the website.

They can be found here.

As with previous years, any red highlighted lifts will open a link to the official IAWA (UK) YouTube channel for an example of that particular lift.

Following the AGM on 30th November 2019, changes to the Executive Committee and Contacts have been updated on the website. They can be viewed here.

A warm welcome to Neil Keddy who is joining the committee in the newly created position of Disability Lifting Liaison Officer.

The latest results from the Bob Smith All-Round Postal League – Leg 5, kindly compiled by Christopher Bass have been uploaded to the website here.

The latest issue of the IAWA Strength Journal has been mailed to members.

If you have opted out of receiving a paper copy you can find the PDF version here. 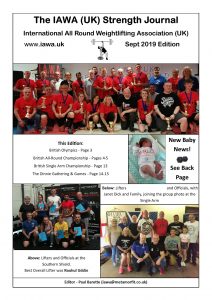 The latest set of results from the All-Round Postal League can be found here.

Thank you to Christopher Bass for compiling the league and verifying the records. Congratulations to our top 3 lifters – Steve Sherwood, Steve Andrews & Gary Ell. The top 3 teams this leg were Granby1, Castlemilk & MetamorFIT1.

Please note that the venue has changed for the Welsh Open Championship on 7th September.

All other details remain the same:

The latest results have been uploaded to the website and can be found here.

Many thanks to Christopher Bass for compiling the results and confirming the records. The top 3 lifters were Rick Meldon (Welcome Back!), Gary Ell and Steve Andrews. The Top 3 teams were Granby1, Sunbury1 and Castlemilk.

After the success of last year’s inaugural OTSM World Postal, John Mahon and I have decided to continue with the promotion again this year.   This years competition dates are July 20th-21st.

Now for a little “background” on this postal competition. It is much different than the other postal meets we have.

The reason for these added stipulations is to give more credibility to the event.  Since all lifts will be done at a set venue at the same time, with the same set of officially recognized officials there is no question to the validity of this World Championship.  Also, I like the idea of everyone world wide doing the lifts at the same time, almost like a meet we are all at together.  There are different lifts chosen this year to give a new challenge to everybody.

Once completed, please send your completed forms to me this year instead of John.  I would like everyone to please use the prepared form for the official scoresheet to minimize submission errors.

The latest copy of the I.A.W.A.(UK) Strength Journal has been mailed to members.

If you have opted not to receive a paper copy, then you can find the PDF version here.